The NSA, Net Neutrality, and Social Engineering at Global Scale 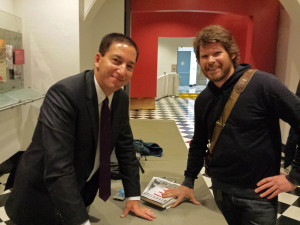 I had the distinct honor of meeting one of my heroes near my home in New York City recently. Glenn Greenwald and Matt Taibbi spoke at the prestigious Cooper Union Great Hall for the occasion of Mr. Greenwald’s book tour supporting his recent release, “No Place to Hide: Edward Snowden, the NSA, and the U.S. Surveillance State.” I was further honored in that I was one of the lucky few in the audience that were able to ask a question of Mr. Greenwald and Mr. Taibbi on such an important occasion and in such a famous landmark. I’m still waiting for a video of that talk to be released and hopefully it will contain the question & answer session so that I can transcribe my exact words and Mr. Greenwald’s reply. The talk at the Harvard Book Store two days later with Mr. Greenwald and Professor Noam Chomsky can be seen here on YouTube, and is well worth your time (it's just over an hour long).

The question I asked has been in my mind for some time. The occasion of Mr. Greenwald’s and Mr. Taibbi’s talk didn’t inspire a hastily concocted inquiry that fell within the context of Mr. Greenwald’s new book. If anything, it was a much bigger question than the occasion probably warranted. My apologies to the speakers, the attendees, and the host if that appeared to be the case. However, it needed to be put out there. I will paraphrase it here:

Is the ubiquitous, mass surveillance by the NSA simply a pretext for social engineering at scale on the Web?

We are all very familiar with the near total control of the traditional mass media outlets by a very small handful of corporate conglomerates. And it is a foregone conclusion that the mainstream news is nothing more than ‘infotainment’ and a sometimes blatant propaganda machine that serves the ideologies, agendas, ratings, and profit motives of these giants. It is a sad and tragic irony that most of us realize this and jokingly refer to it – as if it was just an accepted fact of life. That this is simply how things are and that there’s nothing to be done about it. I sincerely hope that this is not the case.

By definition, social engineering is “a discipline in social science that refers to efforts to influence popular attitudes and social behaviors on a large scale, whether by governments, media, or private groups” (Wikipedia). And one could argue that mass media formats and programming – whether by design or not – are forms and purveyors of large scale influence on attitudes and social behaviors of their audiences. Coupled with Edward Bernays’ public relations & modern advertising, mass media becomes a powerful medium of social engineering. With the relatively recent emergence of the free & open World Wide Web of Sir Tim Berners-Lee, backed by Net (Internet) Neutrality (an extension of the longstanding concept of a ‘common carrier’), an entirely different medium separate from that of the traditional mass media channels, has offered an important alternative to the corporate dominated outlets. Unfortunately, the prevention of the extension of that domination onto the Web by the media conglomerates is no longer secure. Recent proposals by the telecom industry friendly, revolving-door lobbyists in our government (The FCC), has the longstanding Net Neutrality rules under dire threat.

We also understand the unique ‘animal’ that is digital and the World Wide Web. Many of us spend a large portion of our lives online, perusing various outlets and platforms – particularly the social platforms such as Facebook, LinkedIN, Google+, Twitter, Pinterest, Instagram, etc. They’ve become defacto news sources – often breaking important news and stories BEFORE the mass media outlets - that seem more concerned with celebrity and popular culture. The problem is, many of these platforms subscribe to 'filter bubbles' – methodologies by which content and user engagement metrics influence the content & people you actually see in your newsfeeds. And when you add the digital 'influencers' - winners of arbitrary digital popularity contests – and the typical ideological and status quo 'echo chambers' on certain platforms – a type of sophisticated, digital, social engineering begins to come into view. Many of the digital outlets, search engines, and social platforms leverage this ‘programmatic selection’ for you via algorithms, under the aegis of ‘personalization.’ It does not take a huge stretch of the imagination, or of technological capabilities, to leverage Big Data to identify, segment, and manipulate (e.g. marginalize, censor, discredit, etc.) cohorts and control the distribution of certain types of information, certain types of content. And the NSA has become quite capable in the capture, storage, and manipulation of Big Data – particularly when they have unprecedented, back-door access to all the major (and complicit) tech giants. The big question then becomes one of

How do we stop the complete takeover of the Internet & World Wide Web by the government & corporate forces that seek to maintain and increase power and profit?

2 COMMENTS ON THIS POST To “The NSA, Net Neutrality, and Social Engineering at Global Scale”