The Rise of the Automated Information War 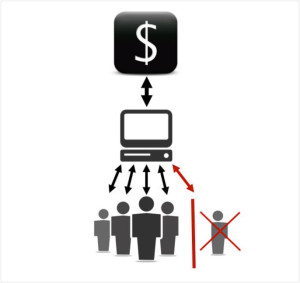 We are all aware of the various ‘wars’ that are being conducted in our midst. And we understand that it is terminology that springs from a public relations point-of-view and methodology. The “War on Drugs” and the “War on Terror” are prime examples of using this type of rhetoric as a means to further justify a protracted, costly, and divisive venture. And of course we Americans are certainly a warlike people – as the late, great George Carlin so accurately points-out.

I am not going into what may seem like a political or ideological rant. The theme I want to address and further explore is that of manipulating the flow of information and the very content and context of information or discourse for less-than-transparent agendas. This information manipulation may have a more nefarious sibling in the sophisticated propaganda of our time, but the information war that I’m referring-to is no less worrisome. It is an electronic war being conducted by filter bubble, by echo chamber, by keyword filtering, by popularity filtering, by network intervention, by IP address, by network or MAC address, by algorithm, by bot – a shadow war conducted almost entirely by machine.

The recent revelations by Chelsea Manning, Edward Snowden, Jeremy Hammond, Barrett Brown, and others have confirmed what many of us already suspected – the widespread, illegal, electronic eavesdropping on the communications of global citizens by the NSA, private security firms, and other government entities in collusion with many top-tier internet and telecommunications companies. It is perhaps because we’ve long suspected this – that there isn’t more outrage that our fundamental privacies and civil liberties have been so completely pushed-aside. After all, isn’t it a characteristic of “Generation Y” or “The Millennials” (aka: “Generation Me”) that they share every aspect of their lives online? And isn’t that the justification – that there should be no expectation of online / electronic privacy in such a narcissistic and voyeuristic world? These are bigger questions and issues to ponder.

What is not being discussed is that the flip-side of the eavesdropping and interception capabilities is that of “systematic information management.” For example, it is not farfetched to believe that if a government entity or private security firm, in partnership with a large social network and an ISP, has the ability to pinpoint your location, listen-in on your conversations, read your emails, peruse your content and various newsfeeds, etc. – that it also has the ability to selectively marginalize your content, selectively blockade or censor your content, and even selectively usurp your online content with sophisticated means of disinformation. Sounds futuristic right?

Already this is in practice. Dissenting or unpopular discourse and narratives are being systematically marginalized by virtue of certain keywords, or by virtue of an individual’s arbitrary and subjective popularity rank (e.g. Klout score, friend / follower count, engagement ranking, network connections, etc.), or based upon sophisticated thematics (e.g. complex phrasing and themes / context discovered with rigorous natural language processing). All the newsfeeds of the various social networks: LinkedIn, Facebook, Google+, etc. are managed by algorithms – by machine. And one or more of these marginalization methodologies – along with even more sophisticated ones (e.g. “sock puppets” or professional trolls and machine-generated personas / fake profiles) – are being employed by the various social networks and their corporate, government agency / political think-tank / K Street partners right now.

It’s a foregone conclusion that the mass media outlets and their respective programming formats have fallen under the control of only a handful of powerful, global media corporations and therefore have the attendant (for profit) biases. Now the security / surveillance / corporate / political state has recognized that the various social networks are also powerful, large-scale publishing platforms and user generated media hubs and as such offer strategic opportunities for the control of the flow of information – and its manipulation - at the level of an individual and his or her personal and professional online networks. It is nothing short of automated, programmatic censorship and social engineering at scale. It’s Professor Noam Chomsky’s “manufactured consent” on steroids. It’s “Wag the Dog Version 2.0” and it is scarier than any dystopian vision that George Orwell had in mind.

"The world isn't run by weapons any more, or energy or money. It's run by little ones and zeros, little bits of data, it's all just electrons. There's a war out there old friend, a world war. And it’s not about who's got the most bullets, it's about who controls the information, what we see and hear, how we work, how we think. It's all about the information."

Sir Ben Kingsley to Robert Redford in “Sneakers” (circa 1992)